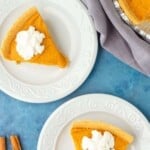 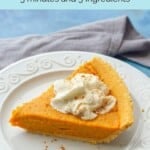 Vegan No Bake Pumpkin Pie takes 5 minutes to make and requires only 5 ingredients! It's thick, creamy, and full of flavor! You simply must try this recipe- it's my kiddo's favorite!

If you are looking for a recipe that's short on effort and big on flavor, this is it! As busy moms, we need recipes like this in our arsenal. Don't get me wrong, making a pie from scratch is very rewarding when time allows. Although, you know...life happens and sometimes we just need something fast and satisfying.

When I realized that jello pudding was vegan, I thought...hmmm, I bet I can make a vegan version of that old Kraft recipe, and that's how the no-bake vegan pumpkin pie was born. And let me tell you, it's SO EASY to make and may I add DELICIOUS. It's my kiddo's favorite!

For the crust you can grab a Keebler graham-ready crust (yes, they are vegan- YAY!) in a 6 oz size, or you could even do mini pies with the single-serve shells. Can't get any easier than that!

If you can't find Coco Whip Coconut Whipped topping, then you can easily make your own with a can of coconut milk. Click HERE for an easy recipe from Givemesomeoven.

Any plant milk will work in place of almond milk, and if you don't have pumpkin pie spice, then you can substitute a combination of cinnamon and nutmeg. I would do 1 teaspoon cinnamon and ¼ teaspoon nutmeg or a bit more to taste.

Putting your pie together

It's so easy to put together. Just put everything (minus the whipped topping) into a bowl and stir together until well incorporated. Then, fold in one cup of the whipped topping. Pour into your prepared pie crust and refrigerate for at least an hour.

Garnish with the remaining whipped topping. SO FAST! SO DELICIOUS!

Please let me know how you like the vegan no-bake pumpkin in the comments. Your feedback means a lot to me, and your star ratings encourage other readers to give this recipe a try. 🙂 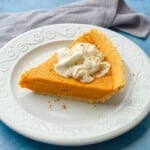 Store your leftover pie covered in the refrigerator for up to 4 days.

Hi, I'm Crystal! Welcome to Dessert Done Light, where I share healthy dessert, snack, and breakfast recipes. If you're looking for a healthy treat, you're in the right place!